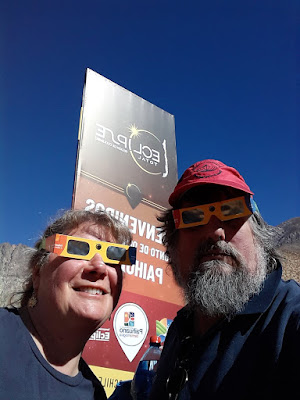 We did take this journey -- maps, photos, wines, and more are on the family blog in
Malbeclipse Part 1: Chile and Malbelclipse Part 2: Argentina. And even more photos at Malbeclipse 2019 on Flickr.


The opening episode of Modern Family Season 9 is about a vacation organized around watching a total eclipse of the sun, presumably on August 21, 2017. And yet! ... I failed to realize what was going on when various characters began to channel their inner Bonnie Tyler in honor of the greatest comeback of an MTV icon in some while. (The very strange video above has had over 342 million views.)

All of which is by way of saying that we have been making some big plans for the next total eclipse of the sun. Not the next eclipse to reach totality in the U.S., as did the one we missed in 2017 (jury duty kept us close to home): the next total eclipse on the planet. It will happen on July 2, 2019, and we will be there! The path of totality will mostly be over water, but the continental portion will traverse South America farther south than any place I have been.
It coincides with the birthday of our geographer friend Jeff.  Actually, we have at least three geographer friends named Jeff. This is the one who joined us on a previous South American adventure, and who has said he might want to join us for this one. He and his partner were easy to convince because of something that will be apparent to oenophiles viewing this map: the eclipse will be visible from some of the most interesting wine-growing regions on the planet: the very high and dry growing regions of Chile and Argentina.

As with Jeff's husband, one of those wines is originally from France. In the Cahors region where it was developed, Malbec is a mid-level wine at best, sometimes even described as "animal" and suitable only for blending. It was introduced over two centuries ago to the high altitudes of Mendoza, Argentina, where it produces full-bodied wines of notable complexity. It is so successful there, in fact, that the vintners of Cahors now look to Mendoza wines for instruction. The success of these wines has been so widely discussed in the industry that we are able to find a dozen different Malbec wines from that single town. And we frequently do.
When we learned that our favorite wine-growing region would be just outside the zone of totality, we started making the plans mentioned above. With 96 percent coverage in Mendoza itself, it would be easy to find a good viewing spot and explore the vineyards of Mendoza in the same trip.

Just as these ideas were coming together, I met a young biochemist who visited our campus as part of a fellowship program sponsored by the U.S. State Department. She suggested that I consider the Elqui Valley in Chile. It is a beautiful highland valley at the southern edge of the Atacama Desert, which is the driest desert on earth. She shared a video that invites exploration of the region's dramatic topography, architecture, vineyards, and astronomy facilities.

It turns out that the Elqui Valley is one of the highest-elevation wine-growing regions in the world and receives more sunlight than any of the wine regions of Europe, allowing for the development of complex Syrahs and other reds. The cool nights require close attention but also provide special opportunities to the vintners of Elqui. The Wine Searcher web site provides fascinating details about the geographic factors affecting vineyards in both Elqui and Mendoza.

Moreover, the remarkably clear skies of the Elqui Valley make it ideal for stargazing and professional astronomy, so that viewing the eclipse there may have some real advantages. It turns out that it will be in the center of the path of totality, so Malbec is beginning to look like a second choice.
Not to worry, though! If we do decide to view the eclipse in Chile, we will not neglect our favorite wines on the other side of the Andes -- a stunning drive and/or a short flight away.

A friend who is a world-class gardener saw this post and referred me to a friend of hers, another botanical expert who writes beautifully about his recent visit to the southern Atacama in Puya Vida, on his urbane horticulture blog. He even found a plant called the Chilean Wine Palm. His post also includes many photos of beautiful, flowering plants because he was fortunate enough to be traveling with someone who knew when and where to go, following a rare rain event.
We can certainly look for these botanical treasures when we go, though we are very unlikely to find so many (if any) in flower. We can, however, find out more about all of the plant communities of Chile at the exquisite Parque Quilapilún, which is between Santiago and the Elqui Valley.

Posted by James Hayes-Bohanan at 6:57 PM