Just last month, we had the great privilege of attending a forum on information integrity led by journalist Sasha Pfeiffer, a print reporter who is also very present on public-radio airwaves in the Boston area. Upon finally viewing the film Spotlight for the first time this week, I learned that she is an even more formidable journalist than I had realized.

The diligent work of her entire team, including upper management at the Globe, is a reminder of the importance of professional journalists in the protection of democracy. Reporters take great risks and great care in finding facts. 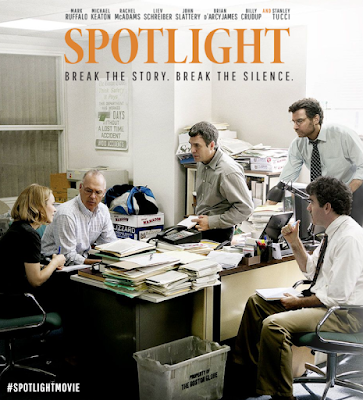 Among many cogent insights in the film is attorney Mitchell Garabedian's assertion that "if it takes a village to raise a child, it takes a village to abuse one." The film makes clear that one of the biggest barriers to exposing the criminal conspiracy surrounding pedophilia was Boston's winged-tipped tribalism. Self-reinforcing networks of elite business, education, and religious institutions were (and to an extent still are) expected to protect each other. A key turning point in the film comes when a new Globe executive agrees to meet the archbishop, but makes it clear that he will do so as a journalist, not a member of the city's elite.

I started to write this post a few days ago, and finish it just as I read about another group that is standing up to misplaced loyalties that are couched in religious terms. In this case, it is southern ministers who are speaking out against the depravity and bigotry of the disgraced judge and senate candidate Roy Moore. He is playing on Alabama's church-supper tribalism to recast his political agenda as a religious cause, and some actually consider his alleged actions to be appropriate. Thankfully, a group of 70 Alabama pastors has refused to have their faith misused in this way.


“It is predatory, soul-twisting, covers over violence and racism and molestation. The gospel of Jesus Christ brings life and joy and rest and peace.”

It is refreshing to someone inside a faith tradition take on so directly the damage done by misplaced loyalties based in commonalities of religious or political affiliation.

Posted by James Hayes-Bohanan at 8:58 AM