I was recently tagged in a popular challenge in Facebook that began:

Loving photography and having plenty of photos to choose from, I took up the challenge, though instead of tagging individuals, I decided to "challenge whomever is inspired." I am not sure whether anyone was.

After posting a couple of photographs -- using an easy Macbook trick to make them monochrome -- friends asked questions about where they were taken. I decided not to caption any of them until my week was complete. I did hint that each day's challenge was met by a photo (or two) taken in a different country.

To avoid spoilers under the original posts, I have decided to post all of the captions here. And at the suggestion of a geography alumna, I am entering approximate coordinates, rather than place names.

Friday (3 of 7):  A community in a Spanish-speaking country, where Spanish is the second language. If you eat quinoa, people in these houses may have grown it for you. Bonus: there might be a cat lounging on one of these walls! (2014)

Sunday (5 of 7 -- 2 photos): This UNESCO World Heritage Site includes a stark reminder of a terrible history and a charming home of stone, thatch, and cactus. (2006) 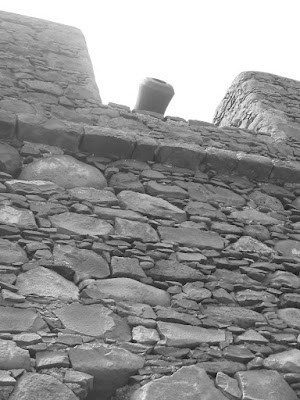 Tuesday (7 of 7): Welcome meal at our partner church featured a very large caldron of soup! And our hosts spend their summers "making hay while the sun shines." (2004)